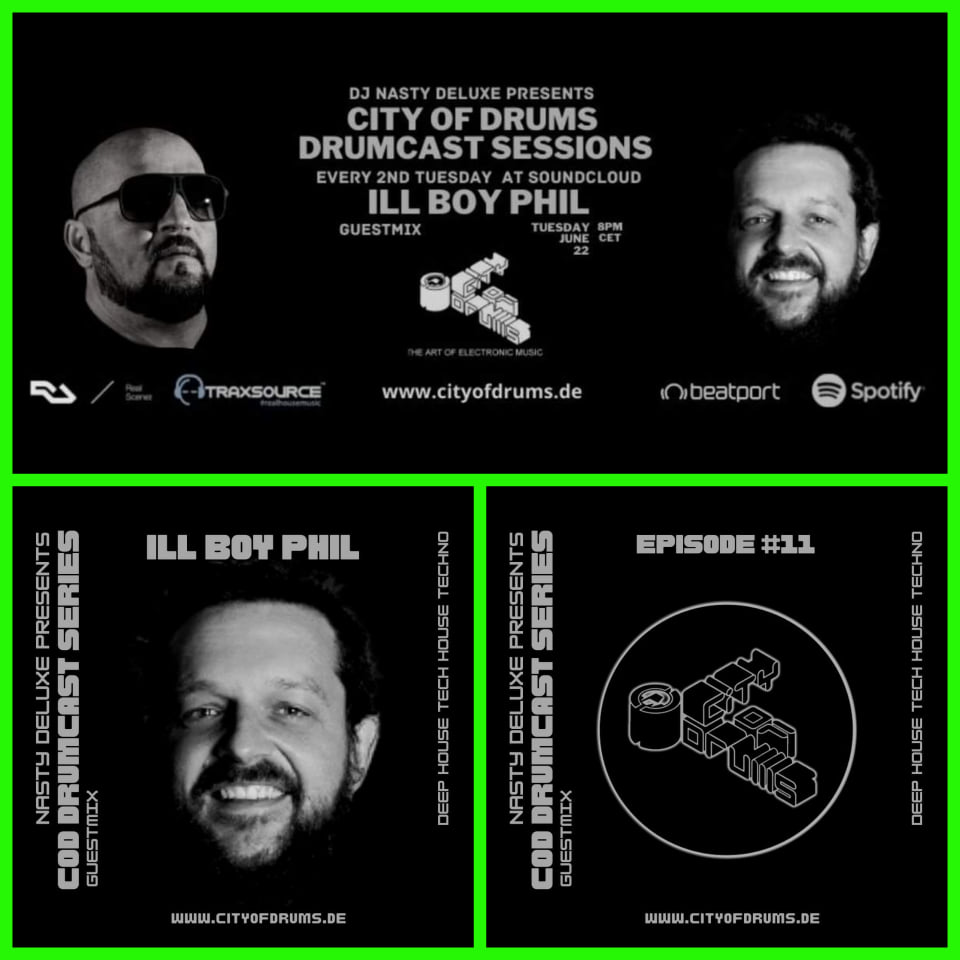 City of Drums is an Electronic Music Label based in Munich / Germany.
„COD Drumcast Series“ is presented by City of Drums / Mathias Teichmann & Kristijan Nestoroski aka DJ Nasty Deluxe and incorporates contains a 14-day Guestmix with the biggest names of international and local DJs and Producers.

We hope that our City of Drums – Drumcast Series will suit your taste!!!

Bio: Ill Boy Phil
Ill-Boy Phil / born 1982 / munich, germany.In the early 90 ́s he bought his first pair of turntables and started messing around with vinyl records. Starting turntablism and beatjuggling as a HipHop-DJ. Being fascinated by the medium, he built up his own record store “Ill-Biznizz Records” in 2001. Everything went well along the time, but things were about to change. After visiting several electronic festivals, Phil fell in love with electronic dance music. He started collecting his first techno and house vinyls and began organizing underground rave parties. Today his parties, called “Treibjagd”, are still the main events in the area. Big names, as well as creative youngsters, are always exited to show up and spin the tables. After so many years Phil decided to advance to the next level and started to produce his own sounds in 2010. After releasing some tunes and remixes on different labels, he decided to built himself and other talented artists a platform: “Treibjagd Records” was born and hit the scene very successfully. Artists like Patrick Kunkel, Pele, Lützenkirchen, Joseph Disco, Dema & Paride Saraceni produce for “Treibjagd Records” and new and talented artists get a chance to become recognized on the newly founded sublabel “U6 Schallplatten”. Phil truly loves music and the art of party. He hosts a radioshow on FEVAH FM 88.3, still plays on every good party he can catch on and searches for young talents to boost their career. His records get support from big names like Sven Väth, Aka Aka, Paco Osuna, Butch, Oliver Schories, M.A.N.D.Y, Slam and many many more.